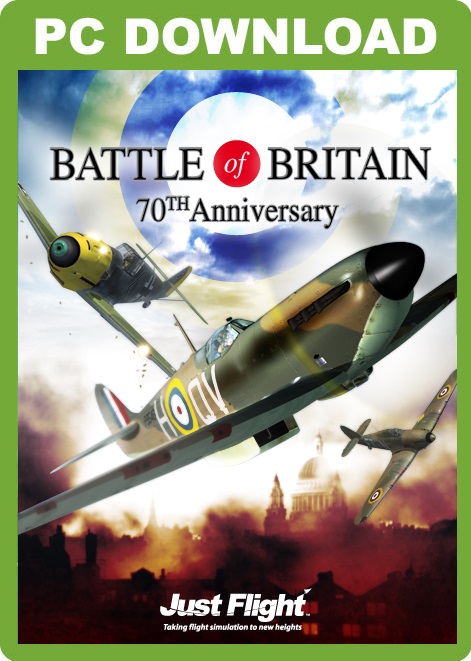 Please note that this add-on is for FSX only and is not a combat simulation - there are no missions included and aerial combat is not possible. This package has been designed purely so that FSX pilots can experience flying these three iconic fighters!

To commemorate the 70th Anniversary of the Battle of Britain, Just Flight brings you a package containing the three key aircraft in this desperate struggle in the air - the Spitfire, Hurricane and the Me 109.

This package contains ALL the aircraft from the separate Battle of Britain aircraft add-ons which are available as Downloads - Spitfire, Hurricane and Me 109.

(Scroll down for details of the individual aircraft)

Spitfire Prototype K5054 -first flew on March 5, 1936. The airframe was finished in primer paint of varying colour densityÂ and the engine panels were left in bare aluminium alloy. The aircraft lacked radio equipment and carried the bare necessities for testing. Captain 'Mutt' Summers was at the controls.

spitfireÂ  Prototype K5054 - as seen at Hendon Air Pageant in the new types park, 1936. Wheel spats had been added to the oleo struts and covered the entire well with smaller folding spats at their ends.

spitfire 19 Squadron Mk1 K9795 with two-blade, fixed-pitch Watts wooden propeller and flat perspex canopy. Also, note theÂ 'ring and bead' gunsight and early aerial. This was the first production Spitfire to be delivered to the RAF for operational use.

spitfire 74 Squadron Mk1 ZP-A with two-blade propeller, flown by Flt. Lt. Adolf 'Sailor' Malan, Hornchurch, May/June 1940. It was in this aircraft that Malan eventually became anÂ ace in several remarkable exploits. The machine was eventually destroyed in a crash in 1943.

Hurricane models feature ring-and-bead and rReflector gun sights depending on the variant.

Prototype K5083 - First flown on 6th November, 1935, the prototype Hurricane differed in many ways from the production models. A retractable tailwheel (later removed) no armament or armour and a simple design of canopy and windscreen were some of the differences. This machine was steadily improved to eventual production standard.

First production Hurricane FT-N L1723 (Battle of France era) -Â FT-N was flown by F/O Patrick 'Tiger' Folkes of 43 Squadron from Ackilington, England in February 1940. It was in this machine that Folkes shot down a Heinkel He111 to score the first 'kill' in WWII over British soil.

First production Hurricane JX-G (Battle of France era) -Â JX-G was flown by P/O Paul Richey of 1 Squadron based at Berry-au-Bac, early in May 1940.Â What's notable about this airframe is the way that the squadron codes have been painted over. The coloured diamond shape on the port wing was a gas detection device - the paint changed colour when gas was present. Early in the war, the High Command believed that Germany would employ chemical weapons, as it had done in WWI.

Early production Hurricane L1584 from 1938 - During this time various squadron marking schemes were being trialled, along with camouflage. This machine has the squadron number 111 painted half in white and half in red and the squadron arms and motto carried on the tail. There was much confusion over the application of the recommended 'day-night' scheme for the undersides, and 111 machines continued with silver grey on all but the outer wing panels, which were duly finished in day-night. L1584 was flown by Squadron Leader Gillians.

Royal Yugoslav Air Force - Other countries' air forces took Hurricanes on charge from quite early on in WWII. During 1938 the Yugoslav government concluded an agreement with Hawker to purchase 12 Hurricane MkIs for the Royal Yugoslav Air Force and followed this up with an order for 12 more together with a manufacturing licence to allow production of the fighter at the Rogozarski and Zmaj factories. By the time of the German invasion of 1941 only 20 machines had actually been delivered.

Standard RAF Hurricane Mk1 KZ-W L1592 (Battle of Britain era) -Â KZ-W was flown by pilots of 615 Squadron during the Battle of Britain. This airframe survives and is preserved in London's Science Museum.

Standard RAF Hurricane Mk1 YB-W P3878 (Battle of Britain era) -Â A machine of 17 Squadron, flying form Debden in July 1940. Flown by F.O. H.A.C. Bird-Wilson, she differed from the standard schemes of the day in having a 'sky'-coloured spinner instead of the authorised black 'night'Â variety.

VC features specific to the Me 109

MeÂ 109-E Tropical 1/Jg27 - The Me 109E4 was very active in the African campaigns of 1941. 'White 3' from 1/JG27 is typical of the type and displays one of the many variations of tropical camouflage trialled throughout this period. Flown by Hans Joachim Mersaille.

MeÂ 109-E Japanese evaluation aircraft -Â Many countries were interested in the Me 109 as a front line fighter. Japan evaluated several of Germany's aircraft and this E4 is one of five sent there for testing. History records them as being 'unarmed'.

MeÂ 109-E Escadrila 58, Grupul 7 Vanatoare - Stalingrad, late 1942. A single victory bar has been painted forward of the cockpit of this Me 109E of Grupul 7 Vanatoare (7th FG). The Donald Duck emblem was applied only to this Group's Emils. This aircraft was often flown by Locotenent aviator Alexandru Serbanescu and it was lost at Stalingrad at the end of 1942.

Me 109-E Russian - The Soviet Messerschmitt Me 109 is one of several supplied under the Soviet-German Pact of 1940. As the tide of war changed, it could very well be that theseÂ aircraft ended up fighting similar machines of the Luftwaffe.

MeÂ 109-E Captured French -Â 'White' 6 was captured by the French justÂ before the end of the Battle of France, in early 1940.

MeÂ 109-E 3.JG52 - This machine carries the famous 'Horrido' emblem of the JG2 unit but little else is know about the aircraft. It is finshed in an unusually dark mottle pattern and carries no familiar JG2 shield beneath the cockpit.

MeÂ 109-E Stab III/JG54 - Flown by Oblt. Albrecht Drehs of Stab III/JG54 this aircraft force-landed near Margate in Kent on 12 August 1940, the height of the Battle of Britain.

MeÂ 109-E Stab/JG26 -Â As flown by Pilot Major Adolf Galland, Geschwwader Kommodore of JG26. Perhaps the most photographed, modelled and painted Me109 ever, it really typifies the 'Emil' as it was flown in the Battle of Britain.