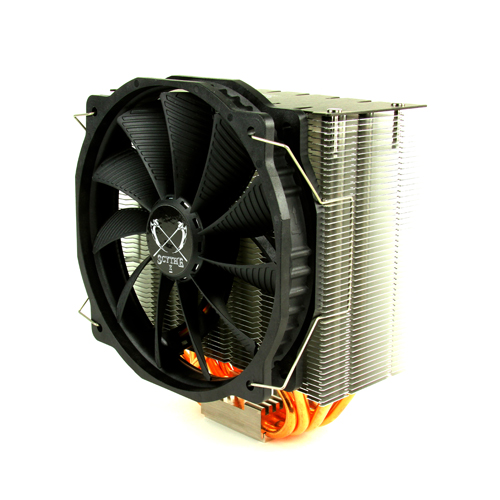 To further maximize the cooling performance and increase the airflow at lower fan speeds, Scythe Ashura CPU Cooler capability can be further enhanced with two fans in the push-pull-setup. The supplied 140-millimeter PWM axial-fan from the new Glide Stream series allows the fan speed to be controlled between 500 and 1.300 RPM thanks to the PWM support. In addition a second fan clip set is supplied, to allow the dual-fan operation.

Scythe’s Engineers focused on designing a very slim, yet powerful heatsink and achieved the overall dimensions of 145 x 161 x 65 mm (W x H x D). The height being restricted to 161 mm, lets the Ashura CPU Cooler fit into most mainstream tower PC Cases compared to other competing 14 cm fan models. Thanks to this asymmetric heatsink design users are able to even use memory modules with tall heatsinks. Excellent heat transfer is accomplished by utilizing total of six 6-millimeter copper-heatpipes, which connect the solid copper base plate and the aluminum fins. To avoid oxidation, Ashura CPU Coolers base plate has been nickel-plated in addition.

To assure a firm and safe fit between the Scythe Ashura CPU Cooler and the CPU socket, a brand new mounting mechanism was developed. In the development process, improved usability was a very important topic, where in result easier and faster to mount clips have been created. Alongside with the new mounting clips, users will be able to find the matching screw-wrench, the user manual and thermal grease in the package of Scythe Ashura.

No compromise has been made in regards to compatibility as well. Scythe Ashura CPU Cooler is compatible to a variety CPU sockets from Intel®, such as LGA 2011, LGA1155, LGA1156, LGA775 and LGA1366, as well as AMD® sockets AM2, AM2+, AM3, AM3+, FM1 and FM2. Both experienced and novice users are able to mount the Ashura CPU Cooler without a hassle.

Scythe Ashura CPU Cooler with the model-no. SCASR-1000 is available on the market as of today. The suggested manufacturers retail price is 36,50 EUR excluding tax and vat.